Regarded as one of the difficult passes in Nepal, Gonja-La Pass (5106m) is to be attempted with the local advice, adequate acclimatization, good equipments and some experience. The pass is usually blocked by snow from December to the last week of February and at any time a bad weather change can make crossing the pass decidedly challenging. It takes about four days to cross the distance between Kyanjin and Gekye and we find no permanent settlement between them. It is very wise idea to have some altitude acclimatization around Kyanjin Gompa before commencing the crossing. We would camp before the pass that would facilitate us to increase our acclimatization.

We commence our overland journey to Syabrubesi by bus. From Syabrubensi, we ascend to the beautiful alpine valley of Kyangjin Gompa. We would stay two days for acclimatization in Kyanjin Gompa. From Ngegang the trail climbs steeply and crosses a snow slope to the pass, marked by rock cairns and prayer flags and with a spectacular view of the peaks to the north and the hills to the south. A steep and dangerous descent flows to Kaldang at 4270m. Coming the other way over the pass the long ascent from Keldang means we must spend an additional night on the southern side of the pass. From Keldang it is a long day’s walk to Dukpu at 4080m. and another day from there to Tarke Gyang at 2743m. The last day’s walk offers tremendous views of the Himalaya as you cross a 4020m. pass soon after leaving Dukpu.

To the north of the pass, we would see the Hilalayas like- Langtang Lirung, Shisa Pangma (8013m.) and some Tibetan Himalayas. To the west, there is Naya Kangri (5846m.) previously named as Gunja-La Chuli. A base camp in this region makes a good starting point for this trek. We drive from Kathmandu to Sundarijal (1350m.). The rough road from Kathmandu turns into a trail near a small hydroelectric plant. The trail will take us through the Shivpuri Watershed and Wildlife Reserve. We will come across a Tamang settlement called Mulkharka. The route heads down the ridge through a forest of oaks and rhododendron to Chisopani (2300m.)

Having lunch at Kutumsang, we trek to Magen Goth (3220m.). The trek continues due north to Yurin Danda ridge. The trail climbs above Kutumsang on a steep, eroded trail mostly through fir and rhododendron forest and descends to Magen Goth.

Today we trek from Magen Goth to Ghopte (3430m.) Via Tharepati Pass (3650m.) We will reach Tharepati and the trail ascends through the forest, climbing in and out of ravines across the valley.

Trek from Ghopte to Gosaikunda (4361m.). The trail ascends through the meadow of bushes and some rhododendron trees and ascends to Phedi (3500m.). Finally, we come to Gosainkunda.

We would take rest at Gosaikunda for pilgrimage. The large lake Gosainkunda at an elevation of 4361m., attracts hundreds of Hindu and Buddhist pilgrims from different corners of the world during the full moon festival each August. One can witness some black and white stones in the lake with an individual story about Lord Shiva and his creation.

It is our turn to trek from Gosainkunda to Chandanbari (2350m.) Our trail gently ascends for a short period and goes through different chortens and small Shiva temples. The trail then descends to Laure Binayak to Singh Gompa and then goes to Chandanbari. Singh Gompa houses a statue of the Green Tara. We would also witness small cheese factories on the way.

It is our turn to trek from Chandanbari to Syabru Gaon (2210m.). Our trail descends through the forest and come across the Chortens en route. Finally, we will arrive at Syabru Gaon which is densely populated by Buddhists.

Trek Syabru Gaon to Lama Hotel (2380m.). Our trail crosses the Bhote Kosi and then climbs through forest of oak and rhododendron. We would also have a glance of languor monkeys jumping from one tree to another.

We would acclimatize at Kyangjin Gompa and go for excursion to utilize our time. We would visit the monastery and the cheese factory, walk up the moraine to see the spectacular ice falls and tumbling glaciers of Langtang Lirung or ascend Kyangjin Ri (4350m).

Today we trek from Kyanjing Gompa to Ngegang(4000m.) which takes about 5 hours. We donâ€™t find villages along the trail. We would enjoy varieties of flora and fauna on the way. In the evening, we would take rest in our camp.

We trek from Keldang to Dukpu (4080m.) which takes about five and half hours. Our camping site will be arranged in the forest. We would be walking along ridge, grassland experiencing pin-drop silence and enjoying the panoramic views of Himalayas.

We trek from Keldang to Dukpu (4080m.) which takes about five and half hours. Our camping site will be arranged in the forest. We would be walking along ridge, grassland experiencing pin-drop silence and enjoying the panoramic views of Himalayas.

From Dukpu, we trek to Tarkeghyang( 2740m.). We would descend about 200m. and climb the 4100m pass. From the pass, we would view spectacular mountain ranges- Annapurna and Everest. Now the trail descends through pine forest, rhododendron forest and pass through the settlement to Tarkeghyang. On the way, we would also visit one of the oldest Buddhist monasteries and Sherpa villages. The people of the villages are well cultured, friendly and cheerful.

Trek from Tarkeghyang to Shermathang (2621m.) Trekking today is comparatively easier than the previous days as the trail goes through flat land with beautiful forests. On the way, we would penetrate the village called Shermathang where we would visit some ancient monasteries.

From Melamchi Pul Bazaar, we drive to Kathmandu. The road is graveled and bumpy till Lamidanda and then we will have pitched road up to Kathmandu.

It is our last day in Nepal. Having breakfast in the hotel, we would go for sightseeing around the valley. In the evening, a farewell dinner would be served in a typical Nepali restaurant. 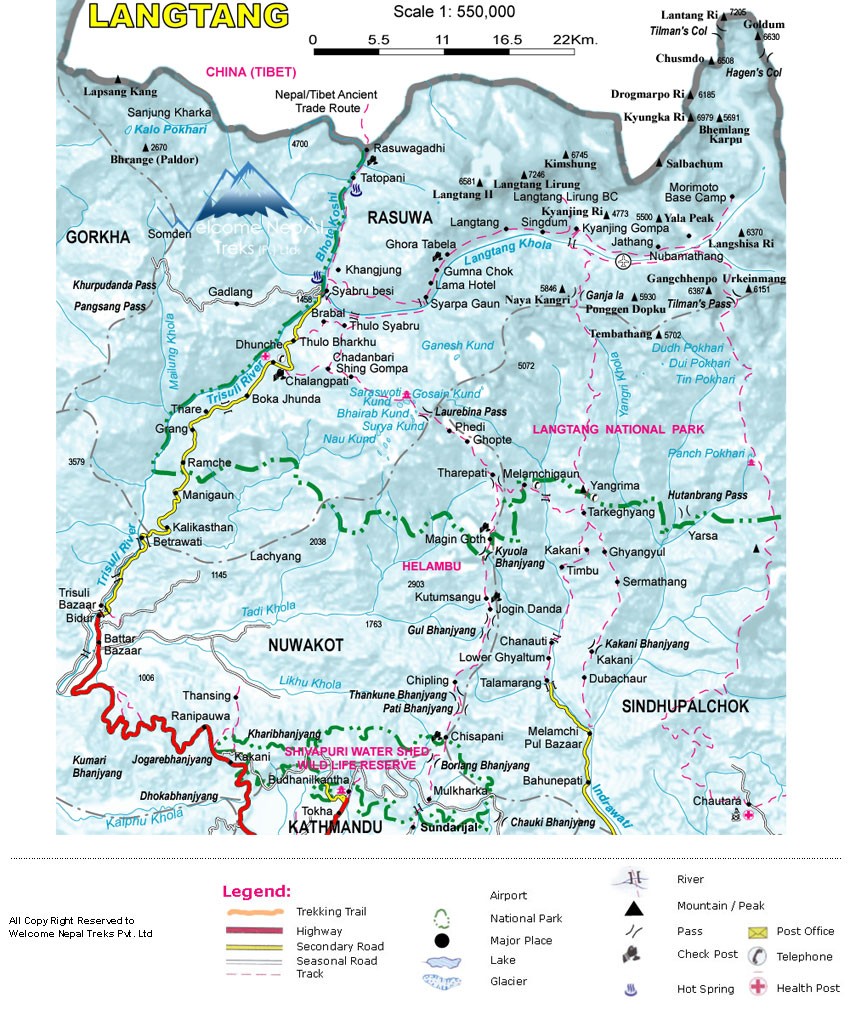